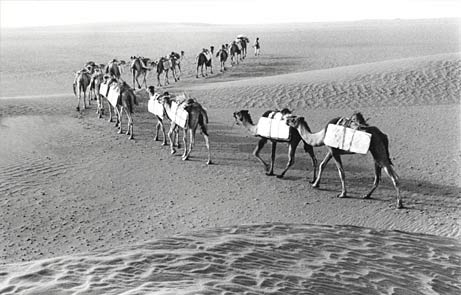 This new Australian train line which connects the South to the North for the first time, is called the “Ghan” in honor of the Afghan camel riders who were instrumental in opening up Southern Australia. I managed to find a web page dedicated to the history of these Afghans who, it turns out, weren’t all Afghan, but included people from all over the Middle East and South Asia:

Although the number of Afghans coming to Australia was small (no more than 3000) compared with other ethnic groups, their contribution to this country has been much greater than most people realise. Afghans have made a substantial contribution to South Australia and Australia but history has almost ignored them, and the role they played opening up inland Australia.

Without the Afghans much of the development of the outback would have been very difficult if not impossible. Whole communities, towns, mining establishments, pastoral properties and some well known explorations in the interior have been made successful because of their contributions.

The same site has a page on the train line as well.

If the Afghans were so instrumental for opening up Australia that they named a train after them, why do they treat real Afghans so badly?