We spent most of our time in Ahmedabad in what might be called a “slum ghetto,” but everyone always talks about what a wealthy city it is. So, to see the other side of life in Ahmedabad, we visited the famous Rasranjan restaurant. 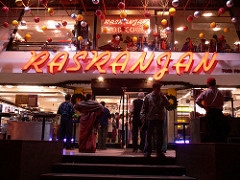 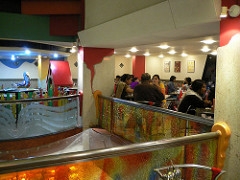 The food was great — and it didn’t make us sick like real street food is likely to do in India — but there was something a little strange about the place. It wasn’t the Santa, although he was a little scary if you ask me. 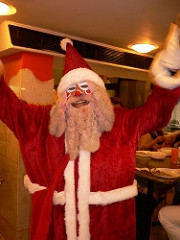 Nor was it the “American Vegetable Chopsey” which was quite tasty despite the name.

No, it was the ice cream desert named “Hitlers Sundae”!

When Shashwati asked why they called it that the manager responded that it was because “it is so dark with Chocolate.” The logic of this is completely beyond me, but there you have it. It reminds me of when I was in Taiwan and some company used a little cartoon Hitler to advertise electric heaters. It didn’t take long, after it was reported in the press, for the German manufacturer to demand that they use a less offensive mascot.