I really was going to go see The Gates today, but you know — it was cold, and I was tired, so I took a nap instead… To make up for my laziness, I present you with The Crackers! I also recommend watching Stephen Colbert, of The Daily Show, discussing how The Gates will “put New York City on the map”!

Why did they have to do this in February?

I’m personally much more interested in seeing the forthcoming documentary film on the event by Albert Maysles, who with his brother, the late David Maysles, was one of the pioneers of American cinema verité. They started making a film about the project about 25 years ago, when Christo first came up with the idea. The Maysles brothers are best known for their 1970 film, Gimme Shelter, “a disturbing, controversial chronicle of a Rolling Stones concert during which four people were killed by the Hells Angels hired by the band to keep people off the stage.”

UPDATE: I finally went before it was too late. 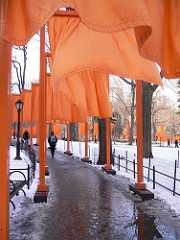 All my photos, here. All Flickr users’ photos of The Gates.