It wasn’t just that it was based on Leonardo’s famous painting:

But that it featured a half naked man. I think historian Jo Guldi is probably correct when he says that this is probably not the real offense caused by the painting:

But hold on. Is a man’s back actually lewd? Shirtless women in Western culture are read as sexual objects, and as such are banned on American television. A man without a shirt in the West rarely conveys the same sexual charge. The issue, of course, is that this shirtless man droops over a woman’s shoulder in a pose suggesting either death or sexual exhaustion, and that his limp undress comes surrounded by alert, clothed women. Drooped, shirtless, among women, the man must be not only an object of sexual desire, but also the subject of some perverted sexuality in which women gang up on men.

Even more scandalous, and perhaps the real reason for all the fuss, is that a female Christ would preside over such games, as if a band of mad women had dressed up to mock the Church. It is this figure ­ the girl-Christ — that has been treated to so many misreadings and misinterpretations in the European press, allowing the Girbaud Last Supper to act like a Rorschach inkblot that reveals the uneasy position of gender in the modern Church.

UPDATE: Here is the advertisement in situ, before it was taken down: 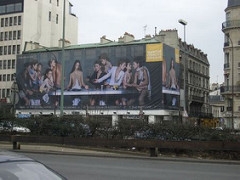