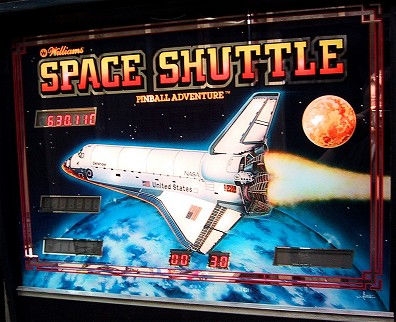 A recent Business Week article about the sole surviving pinball machine manufacturer, Gary Stern, seems as good an excuse as any to write about my favorite pinball machine: Space Shuttle..

In 1984 the pinball industry was in trouble. After the heady days of the earlier 1980’s, when games were built that made most of their predecessors appear positively prehistoric, video games were at the fore, and pinball was in the process of being written off. The fall in demand lead to less complicated games being produced. Speech chips and multiball features were pronounced too expensive. The industry went into freefall, which some might say was partly their own fault; did anyone seriously believe that games such as Black Pyramid and Starlight were going to tempt people away from the videos? Williams, who had not yet mastered the electronic successes aiready being achieved by Bally, looked like they were going to the wall. They desperately design. needed a big hit game and so, perhaps in a final all out effort, they spared no expense on their November release, Space Shuttle.

Although Space Shuttle was Williams’ first foray into “high tech” concept games, its joy lies largely in its simplicity and elegance. The particular way that “multiball” play was activated made it exciting for both novice and advanced players: 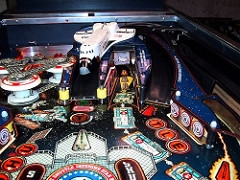 At the top of the playfield a short lane incorporating a spinning target leads back to the U-S-A rollovers. Along this lane, and almost at 90 degrees to the flippers, is a bank of three drop targets. Although they appear difficult to make, an accurate shot from the right flipper can sweep the entire bank. When made, the spinner value is increased and the airlock, (a ball saver gate in the right outlane) is opened.

On either side of the playfield are two dead-end lanes which feed the lock saucers in readiness for multiball. It is perhaps the master stroke of the designer that Space Shuttle offers an easy means of achieving multiball. Even complete novices could get it after very little practice. No complicated sequences were needed, simply shoot the ball into either saucer. Next, knock down the drop target guarding the main ramp. Now you have a timed period in which to make the main ramp shot. Voila, multiball commences, two ball if only one saucer lock had been achieved, three ball if both locks were made. During multiball, the stop and score feature is activated. The score displays cycle between 20k and 99k. Making the ramp shot stops the score cycling and awards the displayed value. Provided that at least two balls remain in play, the feature can be made over and over again. Another cleverly thought out feature was the up-post located between the flippers, and actuated for a few seconds each time the ball started along it’s trajectory up the centre ramp. This helped the player to prolong game time and again added to the game’s interest value.

Unfortunately, the Williams pinball company discontinued production of pinball machines in 1999. (A history of the company can be found on Wikipedia.)

In researching this post I learned about the curious history of the ability to earn extra balls in pinball:

One of the darkest days in pinball history came about on January 21, 1942. Pinball was banned in New York City because it was viewed as a game of luck rather than a game of skill (ergo, playing pinball is gambling!). To “Celebrate” the ban, Mayor Fiorello Henry LaGuardia (as in LaGuardia airport) smashed a number of machines in front of a largely supportive crowd. The ban lasted until 1976. Free games (replays, matches, etc.) Continue to be illegal in New York City to this day, although the law goes unenforced.

In 1960 the idea of an earnable extra ball first appeared in Gottleib’s Flipper. This was done in response to the laws of many areas that made it illegal to award replays.