In his book Envisioning Information Edward Tufte discusses the graphical timetables used by the Japanse bullet train, or Shinkansen:

Station stops are plotted down the side of the grid; time of day runs across the top; diagonal lines show the space-time path of each train. The Tokyo control-room directing these high-speed trains is filled with these graphical timetables, long paper strips used to help oversee thousands of journeys each day — a task which makes clear the enormous advantages of seeing information rather than tabulating data. 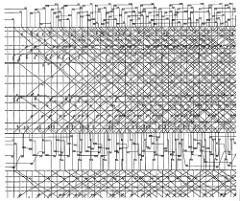 In 2004, on the 40th anniversary of the bullet train, there was much hand-wringing over the fact that a year earlier the trains on that line had registered, on average, a delay — of six seconds.

Compare the Tokyo subway where trains are scheduled minutes apart and are never late with the New York City where a train is considered on time if it is within 10 minutes of its scheduled departure. I won’t even discuss Amtrak!

Unfortunately, there is a down side to this strict schedule, as was seen when over a hundred people died while a commuter train driver rushed to gain 90 seconds he had lost due to a breaking error, putting him behind schedule.

This month, the West Japan Railway, the operator of the train involved in the crash, had for the first time issued a written statement to its employees stating that delays would betray customers’ confidence.

It was perhaps with this in mind that the 23-year-old engineer, Ryujiro Takami, headed for Osaka on Monday morning. Takami, believed to have died in the crash, had only 11 months of experience, and he had been reprimanded once for overshooting a platform by 100 meters.

On Monday morning, at Itami station outside Osaka, Takami overshot the platform again, forcing him to back up and lose 90 seconds.

Joi Ito has some more thoughts on this.