ESWN has a report on the brawl that broke out at Chiang Kai Shek Airport in Taiwan prior to Chinese Nationalist Party (KMT) chairman Lien Chan’s trip to China. 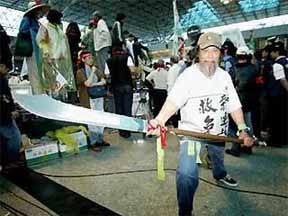 Here is the itemized list of weapons that were observed in combat, most of which were supposed to be banned by the police: