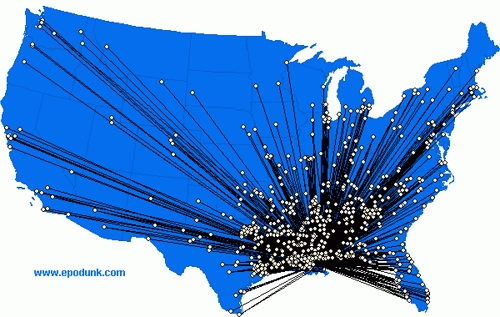 This amazing map, “based on more than 40,000 postings on Internet ‘safe lists’ by Katrina survivors” and documenting the migration of a small portion of the more than one million evacuees, tells a horror story. According to last month’s Mother Jones, New Orleans is being turned into a ghost town:

Fully armed National Guard troops refuse to allow over ten thousand people even to visit their property in the Lower Ninth Ward neighborhood. Despite the fact that people cannot come back, tens of thousands of people face eviction from their homes. A local judge told me that her court expects to process a thousand evictions a day for weeks.

Many of those being evicted are the poor:

Dr. Arjun Sengupta, the United Nations Human Rights Commission Special Reporter on Extreme Poverty, visited New Orleans and Baton Rouge last week. He toured the devastated areas and listened to the evacuees still in shelters and those living out of town with family.

Dr. Sengupta described current conditions as “shocking” and “gross violations of human rights.” The devastation itself is shocking, he explained, but even more shocking is that two months have passed and there is little to nothing being done to reconstruct vast areas of New Orleans. “The US is the richest nation in the history of the world. Why cannot it restore electricity and water and help people rebuild their homes and neighborhoods? If the US can rebuild Afghanistan and Iraq, why not New Orleans?”

The longer the poor and working class of New Orleans stay away, the more likely it is that they’ll never return. That, some say, is exactly what those in power in New Orleans and Louisiana and the US must want. Otherwise, why are they making New Orleans a ghost town?