Does Paris suffer from a lack of fire hydrants? Look, not a hydrant in sight: 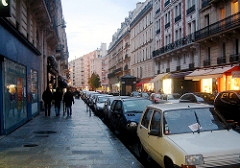 It took me several years of living here to recognize this absence. And now I understand better how gazing upon this lack, this empty space where a hydrant should be, has been at the root of a deep-seated anxiety that has welled up in me over the years.

So what do the Parisians do to fight their fires?…

In Paris, water flows from valves that are recessed into the walkway.

These valves serve a dual purpose. In addition to serving the firefighters, they are used to periodically flush the streets. And for that purpose, they are often accompanied by a curious accouterment:

The rolled-up bit of carpeting is called a chiffon de barrage, or damming rag. At least that is what Clara Wasser, of one of my favorite television shows, karambolage, says that it is called.

(If you prefer a German term, karambolage, on the Franco-German Arte channel, translates chiffons de barrage as Wasserstaulumpen. In any case, I’m not sure whether to believe karambolage. If you google “chiffon de barrage”, you will find that only ten results are returned, and only one of them is not directly related to this expression’s appearance as karambolage’s object of the day of 17 December 2004. If you find more hits, that means that things have evolved, and that perhaps this posting is partly responsible for advancing a new meme in the blogosphere.)

Here is another chiffon de barrage: 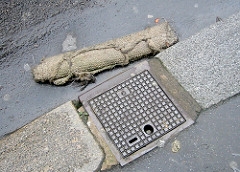 You’ll note that the two examples are quite different. Indeed, each chiffon de barrage that I have seen has been hand made, and exhibits its own artisanal individuality. I had long wondered if they were made by local building superintendents, but karambolage asserts that it is the sanitation workers that make them.

With a deeper understanding, my anxiety is much relieved.