Having just complained about the Times habit of writing as if the poor didn’t exist, suddenly I find two articles that would make you think the Times was run by commie pinkos! In fact, the first story, about the “The Rise of the Super-Rich” sounds surprisingly like this one from the Marxist journal, The Monthly Review. These two articles about the growing gap between the “creamy layer” of society and the middle classes draw on several recent studies with some alarming data. The most striking being that whereas previous growth at the top has helped lift the rest of society, that is not true this time, as this graph makes clear: 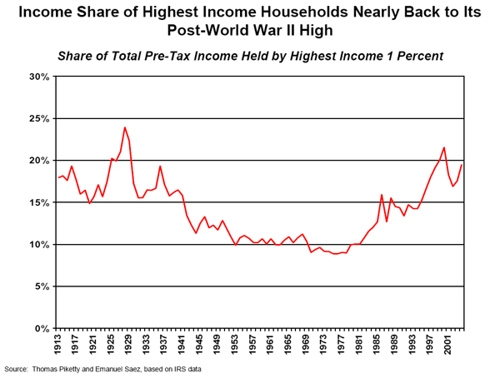 The best-off Americans are not only winning by an extraordinary margin right now. They are the only ones who are winning at all.

Even more disturbing is this graph: 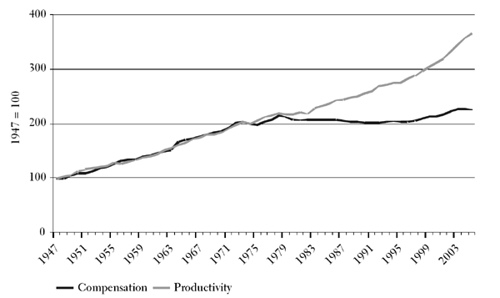 During the years that George W. Bush has been in the White House, productivity growth has been stronger than ever. But the real compensation of all but the top 20 percent of income earners has been flat or falling. Gains in wages, salaries and benefits have been increasingly concentrated at the uppermost rungs of the income ladder.

What to make of all this? William Tabb claims that virtually all spending on political campaigns in the United States comes from less than 100,000 people. There is a word for that, its called an oligarchy. Not sure that this is news. The untold part of this story is the decline of the trade unions which once provided some kind of counter balance, at least during the period between the end of World War II and the fall of the Berlin Wall.

The other Times story of note is “Study Documents ‘Ghetto Tax’ Being Paid by the Urban Poor” by Erik Eckholm, which discusses how much more it costs to be poor.

Drivers from low-income neighborhoods of New York, Hartford and Baltimore, insuring identical cars and with the same driving records as those from middle-class neighborhoods, paid $400 more on average for a year’s insurance.

The poor are also the main customers for appliances and furniture at “rent to own” stores, where payments are stretched out at very high interest rates; in Wisconsin, a $200 television can end up costing $700.

In the William Tabb article he talks about the unbelievable success Senators have had in the stock market (12% above the market vs. 6% for corporate leaders and -1.4% for the rest of us). Too bad poor people can’t give senators stock tips!