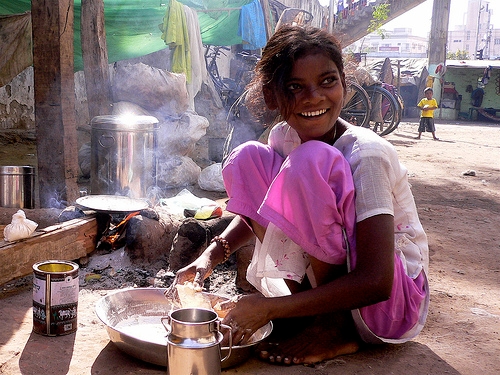 Her home was bulldozed on February 8th.

It was 8th Feb. 2007. It was 12th time. Municipal Corporation people demolish Nomadic people’s huts in Maninagar Area of Ahmedabad city which going to be a Mega City on the death bodies of poor people, to destroy their dreams.

Please help pressure the government into providing homes for these people. Sign the petition.

Click here to see a film by Budhan Theatre about the demolitions.

Last year I wrote (here and here) about the work that Budhan Theatre is doing to help two nomadic communities whose temporary roadside shelters (what they call home) have been repeatedly demolished by the city government (the Ahmedabad Municipal Corporation). Things came to a head when hundreds of activists around Gujarat staged a hunger strike on behalf of their right to government housing (the law guarantees housing to any nomadic community living in the area for a certain amount of time). The strike seemed to be a success, with the city agreeing to provide 106 houses; however, that was an illusion. In reality the city stalled, and then said they needed proof that these people had been living in the city for as long as they claimed. This is a sick joke because the city has the proof, but they are refusing to release it to the community as they are required to do by law under the Right to Information Act.

Then they bulldozed their homes yet again…

Below is the body of the petition:

To: Ahmedabad Municipal Corporation and The Government of India

We are members of a group called Sambhav. We are working with the Denotified Tribes living in the Maninagar region. Maninagar is a small town near Ahmedabad. We go to Maninagar to teach the children of the people belonging to these tribes. We have been going to this place for the past one year.

People from four denotified communities; Dabgar, Rajbhoi, Vaghri, and Bairagi have been living in Maninagar area for the past “40 years”. These people were living in the settlements during the British regime. After independence, their forefathers were released from these settlements by the then Prime Minister Shri Jawahar Lal Nehru. At that time there was no provision for the settlement of such Nomadic Tribes so their forefathers came to this region and got settled. At that time this region was not at all developed. For these many years, these people have been living in this region without any facilities like water supply, electricity supply, proper health and sanitation facilities, etc. They earn their living by doing some petty jobs like “cleaning ears of people at the railway station, selling maps and plastic toys, making ropes, etc”. They have been living in this region in small plastic covered huts for the past few years.

As the time advanced the region around Maninagar was developed and slowly these people came into main city region. About ten years back “the Ahmedabad Municipal Corporation (AMC) started demolishing their houses” so that the land could be used for construction of different things which would contribute to the development of this region. Till now they have demolished their houses more than “ten times”. This increased their problems manifolds.

Atrocities Done by the Corporation and Police:

There are around 2000 people living in this region. Out of these, more than 400 are children, 30 — 40 widows, six are disabled, 60 — 70 people are senior citizens, and there are a lot of infants in this population. “Many people have died during these demolitions”. After demolishing their houses, the AMC takes away the things which these people use for construction of their houses, their utensils, things used in their business, etc. Their “average daily income” is around Rs. 50 — 60 and they have to support a family of minimum 5 — 6 members with this income. In today’s world one can imagine how hard it would be to manage with such a small income. After each demolition these people have to spend from Rs. 500 to Rs. 1000 to get back to their normal life. On March 2, 2006 AMC again demolished their houses and took away their belongings. The people who tried to resist this demolition were “brutally beaten” up by the Police which came with the AMC. They did not even spare “the aged, small children and pregnant women”. Apart from these, some children die due to the “extreme weather conditions” in this region and many people catch various diseases like diarrhoea due to the same.

The Struggle and the Response:

Against the brutality and inhumane behavior of the AMC and Police, these people went on a “peaceful hunger strike” on March 22, 2006 for one day under the leadership of Dr. Ganesh Devy. The aim of this strike was to sensitize the Corporation Authorities about the problems which these people are facing due to the demolitions. Due to this strike, Mr. Anil Mukim, the then Municipal Commissioner and Mr. Sacha, the then Deputy Municipal Commissioner promised to provide alternative land to 112 families. But till now, they have not got anything from the government. Along with this, they have written a “number of applications” to the Commissioner and the Deputy Commissioner of the AMC to help these people settle at some permanent place but have not got any reply for these applications.

The demolitions and the terrible living conditions have lead to economic, social and educational crisis in this community. These people do not have many demands; they just want a piece of land to stay peacefully.

HOW CAN YOU CONTRIBUTE?

This petition is a part of the struggle which different people and groups are doing for getting a permanent settlement for these tribes. We request you to “sign this petition and forward it to as many people as possible” so that maximum people get to know about the actual face of our government and bureaucrats.

If you feel for this cause and want to be a part of this struggle, please “sign this petition and forward its link to as many people as possible”. If possible, “write a letter to the Commissioner” of Ahmedabad Municipal Corporation asking him to take some action regarding this issue. The address has been mentioned below.

We have been meeting the Commissioner regarding this issue for the past few years and are again going to meet him in a few days. We will present the final petition signed by the people before him. This petition might help us in settling the tribes living in Maninagar, so please contribute to this struggle by signing this petition.