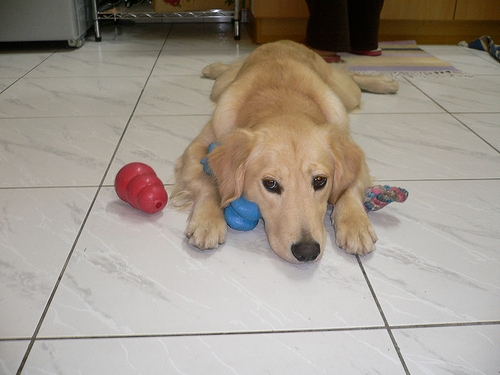 Here is Juno holding three of her favorite toys very close. Two of these had to be bought in the States because Juno will tear through any locally bought toy in about 20 seconds. Having good toys keeps Juno from ripping up our apartment, so it is worth the extra expense.

While Juno is very good at playing only with her toys when we are home, the second one of us leaves she does something bad. This can often be innocuous, such as going into the bathroom or bedroom (where she isn’t allowed) and pulling an item out (such as a sock or some dental floss from the waste bin), but if we go away for a long time it can sometimes result in the destruction of a valued object such as a pair of nice shoes, or a yoga prop, etc. She behaves differently depending on the level of the infraction. With the minor ones she acts almost proud, prancing around playfully. With the major infractions she cowers under the table and hangs her head low.

I know the dog books we have been reading emphasize that you shouldn’t anthropomorphise dog behavior, attributing intent when it isn’t there. However, it seems hard to deny that Juno knows she is violating a rule, even doing so intentionally. At the same time, for exactly this reason, punishment doesn’t seem to make much sense. If the point of her bad behavior is to violate the rules, punishing her is almost a kind of reward!

So what to do? Well, first we have to understand what is going on. Looking around on the web it seems that this behavior is well known and is referred to as “separation anxiety.” It often happens in dogs who’ve been abused as a puppy or had lots of owners (both of which are true for Juno). It seems the best remedy is to train her to be alone. This means leaving her alone for increasingly long periods of time until she can be alone for at least 90 minutes by herself. It is also important not to act like anything special has happened when you return home (even though Juno is jumping up and down as if she hadn’t seen you in ages).

It sounds like a lot of work, but I feel fairly confident it will work. Such positive training method tips have worked well for us since we started training Juno six weeks ago. Using the “clicker training” we have already trained Juno in a number of difficult to learn behaviors. For instance, she can now do “stay” for over two minutes even if we are very far away (but not yet when we are hidden from sight). She is also quickly learning to “heel”. I do sometimes have to yell at her, but I only do so once she already knows the correct behavior. Mostly the yelling seems to just focus her attention back on me and away from whatever distraction she was occupied with. The books recommend training the dog the positive command “look,” which is probably a better way to accomplish this goal.

I think positive training is the right way to go, and I just bought a number of additional books on the subject so I can better understand how it works. I would also like to get Chinese translations of some of these books, as I can hear some of my neighbors dogs whimpering when they are beaten on a regular basis. I spoke to one student about it, but I’m not sure they believed me when I said that hitting the dog was counterproductive.