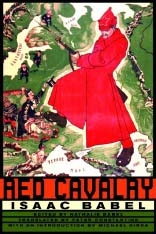 Growing up the only thing I knew about Cossacks was that they raped and killed Jews. Recently, reading Red Cavalry by Isaac Babel, I realized how little I knew about these people who were responsible for driving my grandparents to America. Babel, a Jew, travelled with the anti-semitic Cossacks in the Polish campaign during the Russian Civil War.

His stories are short, haunting, sketches of war that capture the complexity of the Babel’s own understanding of the revolution, and the Cossack soldiers, as well as the Polish people whose homes they stay in. This well written review captures the beauty and horror of Babel’s prose:

Take the first of those stories, “Crossing the River Zbrucz,” which begins with the image of the sun “rolling across the sky like a severed head,” in which the exhausted narrator finds lodging in a Jewish home, ransacked by the retreating Poles, and lies down next to a sleeping old man. He is awoken by the man’s daughter—he has been yelling in his sleep, thrashing about. She pulls back the blanket covering the old man beside him, revealing that “his gullet has been ripped out, his face hacked in two.”

In his stories Babel seems to both admire and despise the Cossacks at the same time. In one story he describes a Cossack nearly killing him for his cowardice because he couldn’t bring himself to kill a dying soldier who was begging for Babel to put him out of his misery. While in other stories we are exposed to horrible acts of cruelty. But who are the Cossacks with whom Babel traveled? Is it an ethnic group, a nationality, or what? Where did they come from? Here is what I could find out:

Cossacks were a sub-ethnic group of Russians who lived from the 15th to early 20th centuries and consisted of all sorts of nationalities (Germans, Greek, Turks, Ukrainians) although most were of Slavic origin. They were early colonizers of Siberia and were the founders of almost all Siberian towns. Cossacks were superior horsemen and exceptional warriors who were always on horseback and always ready for battle, 24 hours a day. Men were required to carry weapons all the time. Daggers were provided even for women and children. Babies were carried in a special hood behind the back so hands were free to fight in case of sudden attack.

But what did the Cossacks have against the Jews? Here is an excerpt from the Jewish Encyclopedia:

The Jews increased rapidly in the Little Russian territories at the beginning of the seventeenth century. They farmed not only the taxes, but even the revenues of the Greek Orthodox Church. At every christening or funeral the peasants had to pay a fee to the Jew. The lords were the absolute rulers of their estates, and the peasants their dependent subjects. When a lord or any other member of the nobility leased his villages or estates to a Jew, his authority also was delegated to the latter, who even had the power to administer justice among the peasants … The extravagant life of the Polish landlords, who spent most of their fortunes abroad, frequently placed them in pecuniary difficulties, and their Jewish tax-farmers were often forced into exactions against the advice and warnings of the wise leaders of the Council of Four Lands, and the Jews of the Ukraine often suffered grievously for the sins of individuals of their race. The uprising of the peasants in the Ukraine has been ascribed by most historians to their oppression by Jewish leaseholders, as well as to the privileges granted to the latter by the kings and nobles of Poland. Recent historical research, however, indicates that the Jews living in the cities, particularly in those of the Ukraine, were not afforded the protection enjoyed by other citizens, and moreover were excluded from the privileges granted to the Christian merchants and burghers …. Notwithstanding this, the Jews managed to gain control of the commerce of the country, as is evidenced by the complaints of the Christian merchants of Lemberg, Kamenetz, Kiev, and many other cities, shortly before the Cossack uprising …. It was the combined opposition to the Jews of the urban and the peasant populations that made it possible for Chmielnicki to arm the entire country against them within so short a time.

The Cossack uprising was one of the great events of Russian History, and the Polish campaign described by Babel seems to share many similar features with what happened in the 17th century. It is worth reading the whole account! Here is another account. As well as here.

Much more information can be found about Cossacks over at the Cossack Web. And don’t forget to read the “Cossack Letter” — listed in the Ripley’s Believe it or Not as the “Most Defiant Letter”!