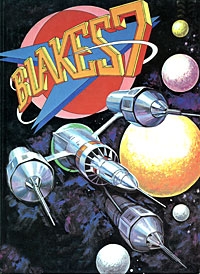 If the word “Avon” makes you think of a cosmetics company then you are clearly not a fan of the 80’s British Sci-Fi show “Blake’s 7“! Blake, the ostensible hero of the show was killed off after the third season — imagine if the main characters on Star Trek could die at any time! Avon was sort of a science fiction version of Alex P. Keaton, Michael J. Fox’s character “Family Ties” — self-interested but not completely evil. In one episode he contemplates abandoning his crew mates on the planet and taking the ship by himself. Only when the computer calculates he would have a very slim chance of escaping enemy ships without the rest of the crew helping him does he decide to wait for them to return. In the end it was Avon, not Blake, who emerged as the real (anti-)hero of the show.

Today the BBC reported that Paul Darrow, who played Avon, has just bought the rights to the show and plans to bring it back! Somehow I doubt this will be as disappointing as Star Trek the Next Generation was… Unlike Star Trek, in Blake’s 7 the federation was an evil Fascist empire, not some kind of paternalistic force for universal peace. Don’t know if a new series can really capture the spirit of the old one — having a budget and special effects would certainly ruin some of the grit of the show. But, if nothing else, it should lead to Blake’s 7 reruns!

On the other hand, after watching the Japanese anime TV series, Cowboy Bebop, will Blake’s 7 still seem so amazing?