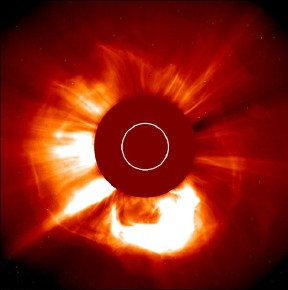 If your cell phone stopped working the other day, here is why:

A massive solar flare erupted from the surface of the Sun at 9:51 UTC on October 28, 2003. The solar flare persisted for more than an hour, peaking at 11:10 UTC. Associated with the flare was an ejection of a billion tons or more of gas from the Sun’s tenuous outer atmosphere, or corona. Both flare and coronal mass ejection accelerated charged particles to very high energies and hurled them at near the speed of light directly toward the Earth. It takes light roughly 8 minutes to travel from Sun to Earth and these particles made the trip in less than an hour.

And don’t miss the amazing animation of the solar flare as it happened!