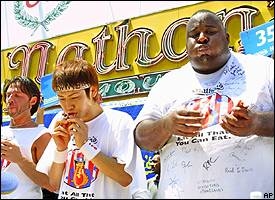 So how does Kobayashi, who weighs only 145 lbs., beat the 408-pound Edward Jarvis at a hot dog eating competition? (Note: Kobayashi’s competitor in the photo is Eric “Badlands” Booker, not Edward Jarvis.) It turns out that he has a very strict training regime:

Kobayashi’s regimen includes shrinking his gut by jogging for hours, then distending it by chugging gallons of water. He regularly feasts on giant meals of low-fat, high-fiber foods like cabbage, which stay in the stomach longer before breaking down. (By the way, the world record for cabbage consumption is 6 pounds, 9 ounces, in 9 minutes, held by American Thomas Hardy.) And he keeps trim: A skinny man’s stomach has little fat to push against it and fight the food for space.

But he also must use his brain:

Muscles stretch when they relax, and when we eat a big meal, our stomach muscles relax so much that they send a message to the brain, which interprets the signal to mean a full belly. Then our brain stops us from eating anymore. But a good training regimen deadens this communication, causing “the signal to the brain or the brain itself to become less responsive to the large volume of food,” says Douglas Seidner, M.D., program director for clinical nutrition at the Cleveland Clinic. In other words, you can eat yourself numb, or at least deaden your urge to stop.

In case you didn’t know, Kobayashi hold the world’s record for eating Hot Dogs: 50 of them in 12 minutes!