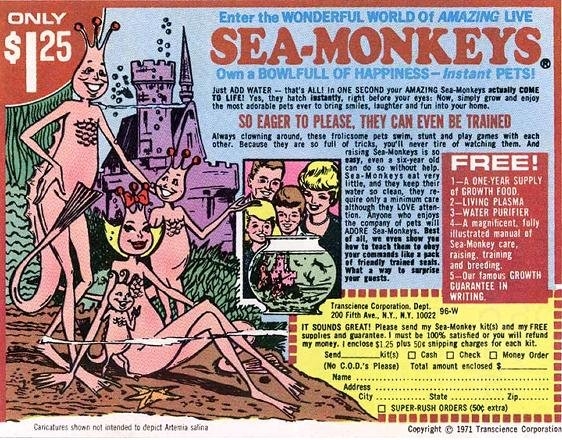 Do you remember this advertisement from the back of comics you read when you were a kid? I sure do, which is why my attention was caught by the NY Times headline: Harold von Braunhut, Seller of Sea Monkeys, Dies at 77. It never occurred to me that one man could be behind such an important cultural phenomenon. He seems to have been quite a character:

Mr. von Braunhut gravitated toward life’s crazier edge, racing motorcycles as the Green Hornet and managing the career of a man who dived from 40 feet into a kiddie pool filled with 12 inches of water. He sold invisible goldfish by guaranteeing that owners would never see them.

How disappointing to also find out that he was allegedly a member of the K.K.K. (even though he was Jewish)…

More on Sea Monkeys can be found here and here.