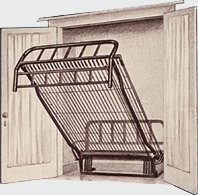 I’ve only seen Murphy beds in movies, and then usually as part of some joke where someone accidentally gets folded away with the bed in the closet. So I was very happy to read a story about them in the Jackson Heights newsletter, Views form the Heights. The story is by Robyn Einhorn, an MA candidate at Parsons School of Design who is researching the Murphy Bed.

The true Murphy Bed is a metal frame attached to a steel reinforced doorjamb with a patented hinge that swings the bed out from the door into the room. It was the invention of William Lawrence Murphy [1856-1957]. …. William Lawrence Murphy lived in a one-room apartment. He began to tinker with hide-away beds after he became smitten with a “fine young lady.” The woman came form a good background, her father was an engineer for the San Francisco cable cars, and she an educated opera singer. Courting in those days would not permit a lady to enter a gentleman’s bedroom; indirectly, William Lawrence invented the in-A-Door-bed because he fell in love. With his new invention, he safely stowed away his bed, transformed his one room apartment into a proper parlor, and was free to have a female caller. “The cowboy, William lawrence married the opera singer, Gladys, in the early 1900s.” Now, his hobby of experimenting with hide away beds was a full-time business.

It seems that the Queensboro Corporation, which developed Jackson Heights, put Murphy beds in many of their buildings.

NOTE: If you live in the area had have an In-A-Dor Bed, or have vintage photographs of such beds, email Robyn at: robyn_e [at] hotmail [dot] com.