Everything in Taiwan is about food — even politics:

With the pan-blue camp’s post-election protests going into their sixth day, some Democratic Progressive Party (DPP) supporters have begun urging people to attend the rallies — and eat the free food being served there to protesters.

In a widely circulated e-mail, DPP supporters asked recipients to fight “black gold” by eating as much of the pan-blue camp’s free food as possible.

…The e-mails includes descriptions of the food available at the rallies.

“In addition to three square meals a day, you can expect snacks, including instant noodles and steamed buns. The box lunches that are being distributed contain mostly either chicken or pork,” one e-mail reported.

UPDATE: Photos of KMT food being eaten by DPP supporters (thanks to H.H.!!!): 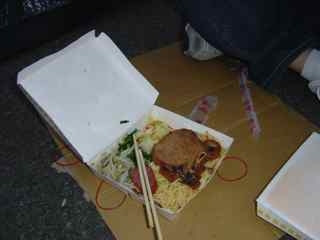