One thing about almost any large city in a developing country — you’ll see everyone riding around on scooters. One of the biggest changes between my first trip to Taiwan in 1991, and when I returned seven years later was the large amount of people driving cars instead of scooters. That, and in Taipei at least, they had managed to get everyone to wear a “protective” helmet (many people bought cheap plastic hats that looked like helmets). But all this is just an excuse to share this photograph I found on an excellent site called Asian Historical Architecture. This is pretty typical: 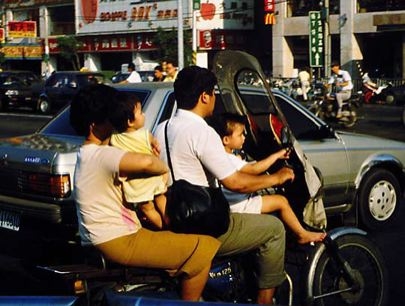 Except, of course, he’s driving more of a motorcycle style scooter than the cool modern looking scooters you see most people driving.

The language on the scooters is also great. Many of them have nonsense English phrases on them. One I remember is:

We reach for the sky, neither does civilization.

I have a whole list of such scooter phrases somewhere, but I have to find it…