In spite of advanced technology and the Unicode character convention, people are still in the habit of neglecting the diacritics of foreign languages. These are mostly needed for writing the names of persons and places. I think this practice is now outdated. Computerized typesetting allows one to readily produce all foreign graphemes with no real difficulty. The other, seemingly easier solution — to neglect the diacritics altogether — is simply typographic discrimination. It is to be avoided. People have the right to see their name spelled properly. In some cases the meaning of a word, and usually the pronunciation, changes if diacritics are omitted.

I know I’ve been guilty of typographic discrimination — but in Mac OS X it is rather easy to avoid. Now, all you need to do is enable the character palette in the international preference pane (under “input menu”). Then select “Unicode” from the drop down menu, and “latin extended A” from the list on the left. Here is what you will see: 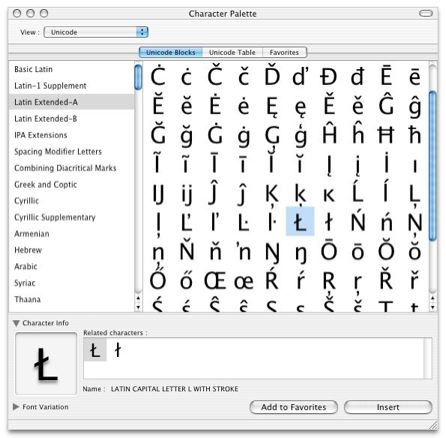 Just pick the character you want and hit “insert”! You can also add commonly used items to your “favorites.”

Of course, I haven’t yet converted this blog to enable unicode (especially unicode posting via ecto) — something that’s been on my list for a while…

(From a comment by John “Zizka” Emerson in a thread on LanguageHat.)

UPDATE: While checking the link to Zizka’s web site, I found his John Kerry Smear Page, which is well worth checking out.