Forget NASCAR moms, single Dads, disgruntled soccer players and other swing voting blocks. What we want is the “pop” vote! Those who say “soda” seem to be solid Democratic supporters, with the “coke” crowd going Republican (I guess this is shown by their willingness to use a corporate trademark as a generic term), and a lot of the swing states either saying “pop” or displaying some clear confusion about where their soda-pop-coke allegiances lie.

Here is a map showing the distribution of soda (green) vs. coke (red) and pop (blue) — notice how swing states like Florida, Pennsylvania, Wisconsin, and Missouri show a fairly even pop/soda split, and swing state New Mexico has a lot of speakers who fall in the “other” category (Spanish?): 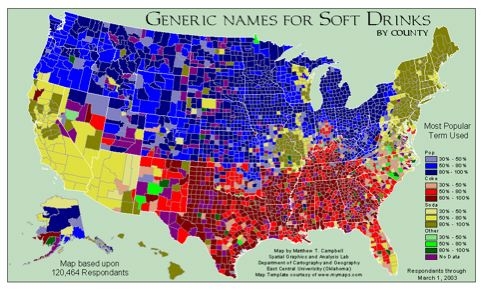 Here are the results from the 2000 election:

And here is the latest Zogby poll showing the results from the “swing” States (picture from the Wall Street Journal, no link available): UPDATE: Why is Kevin Drum getting all the credit? (Thanks Mark!)

To be fair, it does look like many people had the same idea independently. For instance, Irish Eagle wrote this on the 25th, three days before my post:

One last thing, compare this map with the electoral map from 2000 by county. They’re not identical, but there’s a general trend for Bush voters to say “pop” or “coke” and Gore voters to say ” soda”. Don’t know what that might mean.