The NYC subway system is considering a ban on photography on its trains and platforms — despite the long and honourable tradition of shipping kick-ass art by taking snaps on the trains. Here’s a public inquiry site where you can comment on the proposal.

Here is the text of the proposed ban:

This is from Boing Boing, where they first reported it in an earlier post, saying:

Photos of the NYC subways have won awards and been given their own shows — and more importantly, photo-documentation of neglect through the subway system were critical to the re-funding and revitalization of the service.

One of my favorites are pictures surreptitiously taken by Walker Evens in the 1938, and published in the book Many are Called in 1966. In 1938 it wasn’t easy to take pictures without someone noticing.

He strapped a Contax 35mm camera to his chest, concealed it underneath a coat, and operated the shutter with a release running down his sleeve.

Now, of course, everyone has a camera in their Cell Phone, which makes one wonder exactly how the MTA plans to enforce their new rules.

Here is one of his pictures: 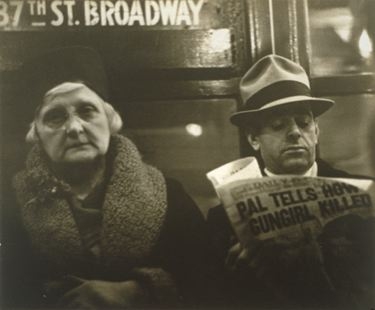