Republicans don’t live in John Edwards’ “two Americas” — they live in a third America, less polarized, where outside information doesn’t get through. Democrats need to speak to the America they can reach about the issues it cares about: Jobs, Iraq and healthcare.

From Body and Soul, a link to an important new Salon article from economist James Galbraith on the relationship between voting patterns and inequality.

States that are sharply divided, usually between major cities and lower-income hinterlands, are primarily Democratic. States that are either near the economic median or else sparsely populated tend to be Republican.

There is even a nice map: 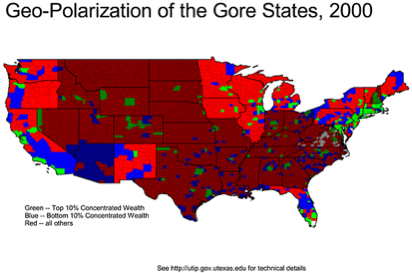 Reminds me a bit of this map.