Who is Daisuke Inoue? He’s only the guy who invented karaoke! 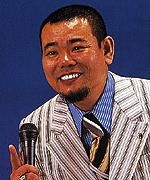 Born in Osaka in 1940, he grew up in the same area where he now works, Nishinomiya, named in honor of an emperor’s residence. At Osaka Technical High School he took up the drums because, he says, “all you have to do is hit them.” Before long he was making more money than anyone else in the school by thumping away in a Hawaiian band that played the old dance-halls left behind by American G.I.s.

He invented karaoke for the president of a small steel company who was a fan of Inoue’s music and wanted to sing along while on an overnight trip:

the drummer–unable to leave his job — obliged by providing him with a tape of his accompaniment. The boss delivered an emotional rendition of Frank Nagai’s Leaving Haneda Airport on a 7:50 Flight, Inoue collected his money in absentia and karaoke (a term long used in the industry for house musicians–it literally means “empty orchestra”) was born.

Inoue later created a business making machines which would play a number of songs and providing them to local nightclubs. Unfortunately, he never secured the intellectual property rights to the idea, and so didn’t make any money from the global fad he started. His company even went broke…

I can’t read this, but I think its his homepage. Here is an NPR story about him winning the prize.