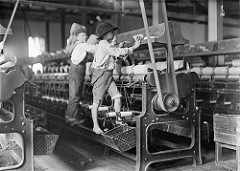 The above is a picture taken by Lewis Hine for the National Child Labor Committee in 1909, titled “Photograph of Bibb Mill No. 1, Macon, GA.” The following news story would make you think we are back in the 19th century:

The nation’s largest employer, and one the nation’s largest corporate political donors, was cited for using children in dangerous jobs in its U.S. stores; and, then got a sweetheart deal that gives the company fifteen days advance notice before the government will initiate any investigation of future violations of federal workplace laws.

According to allegations contained in a settlement agreement with the U.S. Department of Labor, Wal-Mart was engaged in the unconscionable practice of using children to operate hazardous machinery in stores in New Hampshire, Arkansas and Connecticut. The machinery referenced in the case— balers, shredders and compactors— are standard equipment in retail stores, and are commonly associated with injuries involving the crushing or severing of arms and hands. Safety regulations on the books for decades have prohibited employers from using  children to operate the machines. A company the size of Wal-Mart with a long history of operating retail stores should have been well aware of the law as well as the dangers to children in operating the restricted machinery.

While the corporate giant with billions of dollars in revenue agreed to pay a $135,000 fine, its representatives got a sweetheart deal that could insulate the company from getting caught in future violations. Wal-Mart gets fifteen days written notice of any government investigation or audit. Wal-Mart can work a child on a compacting machine or baler without fear of any unannounced enforcement action, and simply reassign the child worker during the time of the prearranged inspection. Further, the agreement allows the company ten days to correct the violation. A literal reading of the agreement would allow Wal-Mart to continue to put children at risk for over a week even if the government uncovered the violation.

Here are some stats on compacting machine fatalities (note: this is just fatalities, not all injuries):