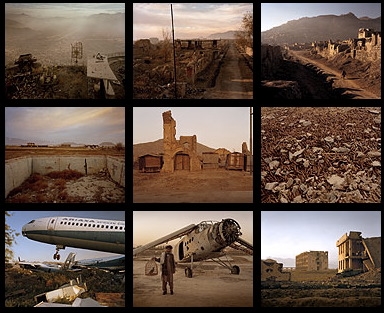 Afghanistan is unique, utterly unlike any other war-ravaged landscape. In Bosnia, Dresden or the Somme for example, the devastation appears to have taken place within one period, inflicted by a small gamut of weaponry. However, the sheer length of the war in Afghanistan, now in its 24th year, means that the ruins have a bizarre layering; different moments of destruction lying like sedimentary strata on top of each other. A parallel is the story of Heinrich Schliemann’s discovery of the remains of the classical city of Troy in the 1870s. Digging down, he found nine cities deposited upon each other, each one in its turn rebuilt upon the rubble of its predecessor and later destroyed.

Afghanistan keeps similar artefacts in what seems to be a Museum of the Archaeology of War. Abandoned tanks and troop carriers from the Soviet invasion of the 80s litter the countryside like agricultural scrap or they have been used as footings for embankments and bridges, poking from the earth like malevolent fossils. The land has a different appearance where there was fighting in the early 90s. In this instance the tidy, picked–clean skeletons of buildings are separated by smooth, hard earth where de-mining teams have ‘swept’ the area. In places destroyed in the recent US and British aerial bombardment, the buildings are twisted metal and charred roof timbers (the presence of unexploded bombs deters all but the most destitute scavengers,) giving the place a raw, chewed-up appearance.

Mikhail Bakhtin called this kind of landscape a ‘chronotope’: a place that allows movement through space and time simultaneously, a place that displays the ‘layeredness’ of time. The chronotopia of Afghanistan is like a mirror, shattered and thrown into the mud of the past; the shards are glittering fragments, echoing previous civilizations and lost greatness.