I honestly don’t remember much about Colin Pine. He was a classmate of mine at ICLP in Taipei, where I studied Chinese for a year. Studying Chinese was such a difficult and intense experience for me that I didn’t have much time to socialize with my fellow classmates, but Colin was one of those outgoing people who made learning a foreign language look easy. If I recall correctly, he had lived in Taiwan for a few years before starting at ICLP, and already had a wide network of Taiwanese friends outside of the program.

Now Colin is going to be famous.

A new film about NBA legend Yao Ming 姚明, entitled The Year of the Yao, focuses on the relationship between the basketball player and his interpreter. And his interpreter is none other than Colin Pine. 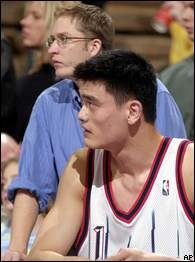 Richard Shaw’s review makes it sound like the film is going to be a sure fire hit among American basketball fans. 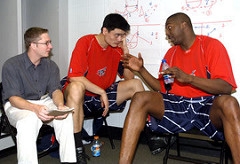 In a recent post about Chinese attitudes towards race, I mentioned that Chinese attitudes towards African-Americans were different from those held regarding Africans. Basketball has a lot to do with this. Basketball was huge in mainland China when I visited in 1990, I’m sure its popularity has only grown since then. It seems like a lot of the film’s humor revolves around

Yao’s unique and hilarious relationship with his new African-American teammates, complete with jokes about Chinese and Soul food (with requisite comic revulsion at eating fish heads, Yao’s first Thanksgiving turkey, and the surreptitious serving of snake to an unsuspecting teammate).

Sounds kinda boring and clichéd to me, but I might end up seeing the film just to contemplate the very different career path I might have had after finishing my Chinese studies!

ELSEWHERE: Looking for reviews of the other film about an interpreter?