Mosquito Brother is the alias of Hsu Hai-ching 許海清, one of Taiwan’s top gangsters, whose funeral procession yesterday included thousands of gangsters from all over the Pacific rim. 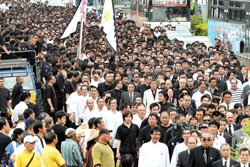 The gangsters were obviously not too scared of the Police, who took the opportunity to videotape them.

“Police videotaped those alleged gangsters to look into whether they have violated the Organized Crime Prevention Act under the criminal code,” Lin Ban-liang (林邦樑), spokesman for the Taipei District Prosecutors’ Office said yesterday.

Hsu’s funeral service was held at Taipei First Municipal Mortuary at around noon yesterday as thousands of local gangsters and members of crime syndicates from Hong Kong and Japan formed a line to pay their respects to the Taiwan’s notorious “godfather” Hsu.

The service was a veritable family reunion for Taiwan’s criminal underworld. Members represented gangs such as the infamous Bamboo Union (竹聯幫), the Four Seas (四海幫), the Heavenly Way Gang (天道盟) and the Pine Union (松聯幫) all showed up wearing black. Members of the Japanese crime syndicates Yamaguchi-gumi and Asyura yesterday also attended the service.