Frequent readers of Keywords will know that I am obsessed about the issue of inequality. One of the frequent arguments put forward by conservatives is that inequality is a necessary side-effect of growth and, as such, should be tolerated. This is the argument that former Bush economic advisor, and Harvard economics professor Greg Mankiw made in a letter to the New York Times:

In other words, the rich are simply being rewarded for helping fuel growth.

The rich do take a rising share during the 1920s and 1990s, but growth income per capita was no faster in the 1990s as a whole than in the 1980s and 1970s–it was only the last half of the 1990s that saw rapid growth. And the fastest-growth decades of all are the 1960s–with a low share of income inequality–and the 1940s (driven by recovery from the Depression and the high-pressure economy of World War II). 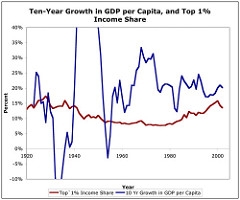