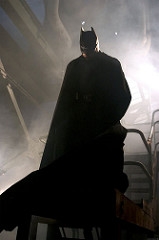 Shashwati left it to me to discuss the strange orientalism of Batman Begins.

Let me start with a brief movie review: It was good, but I wasn’t nearly as thrilled with it as everyone else. For one thing, I hated the fight scenes which were edited so that you couldn’t really see any of the action — it was all a boring whirl. Haven’t they learned anything about visual pleasure from Hong Kong movies? There were a couple of action scenes which were pleasurable to watch — but that usually came from the drama rather than the action.

And second, I found the evil Ra’s Al Ghul to be completely unconvincing as a villain. It was the writing. His motivation made absolutely no sense whatsoever. If it hadn’t been for all the secondary villains: Dr. Crane and Carmine Falcone, who were truly convincing and wonderful, the film would have been a flop.

Apart from those two shortcomings, I agree that it was a well made film. The acting was superb, it was beautifully shot, and the minor characters were all interesting enough to more than make up for the inevitable dullness of the leads.

Now back to orientalism. [Warning, spoilers ahead.]

The main premise of the film is that an ancient secret fellowship, a Free Masons made up of ninjas, functions as a Darwinian corrective on society. Every time a society, such as Ancient Rome, starts to decay, they help the process along by speeding up its inevitable destruction. There are clearly non-Asian members of this fellowship, and it turns out that orientalism is itself a ploy, a ruse to distract the enemy — the real leader isn’t Ken Watanabe’s Ra’s Al Ghul, but Liam Neeson whose Ducard turns out to be the real Ra’s Al Ghul; but this doesn’t absolve the film from the fact that in the final scene we know who the evil guys are because they are the Asian truck drivers. And Neeson himself is sporting a Fu Manchu beard.

And yet, it isn’t orientalist in the usual way. For instance, the spiritual journey undertaken by Bruce Wayne under the tutelage of Ducard/Ra’s Al Ghul is not about some deep oriental knowledge — but is a very personal journey unique to Bruce Wayne’s own tragedy. Even the monastery itself is seen as somehow separate from the lives of the people living down below — rather than representative of them.

So while Ducard/Ra’s Al Ghul’s motivation only makes sense if we view him as an agent of the Yellow Peril, the filmmakers actively use the audiences’ own orientalist expectations to trick us into believing that the two aren’t one and the same. (Although I’m not sure as to the point of this deception, since even without it we still know that saving Ducard’s life is going to be a big mistake.) And, secondly, Bruce Wayne’s own spiritual journey avoids some of the cliches of the Karate Kid, while still relying on the audiences prior knowledge of these cliches to be effective.

In short, what we see in this film is a more sophisticated orientalism, one that is drawing more on the history of orientalism in film, on orientalism as a genre, than it is on orientalist stereotypes — and it in fact plays with the audience expectations created by those stereotypes. And yet, one can’t help but feel that the filmmakers would have been happier if they could have just written a straight Fu Manchu villain from the get-go. It might even have been a better film if they had.

War of the Donuts