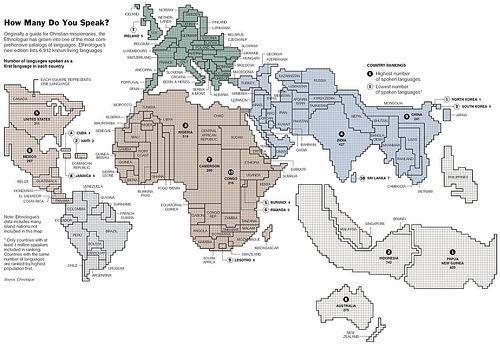 In the above map, the size of each country represents its linguistic diversity, as recorded in Ethnologue. It is taken from this NY Times article about Ethnologue.

I first learned of SIL when I was looking online to enroll in the Summer Linguistics Institute (SLI) run by the Linguistic Society of America. I nearly enrolled in the wrong one — until I noticed that much of the summer would be spent reading the bible. I finally figured out which was the correct program, and it wasn’t till I went to Taiwan that I met anyone who worked for SIL. There I was truly impressed by excellent scholarly work on Taiwanese Aborigine languages done by at least one SIL worker, who has since become a friend.

The article mentions the controversy over whether SIL missionaries are good or bad for local cutlure. In Taiwan, missionaries aren’t much of a threat to Aborigine culture these days — most of them are already Christian. And some churches have done a tremendous amount to promote indigenous cultural rights.

On the other hand, this article:

paints a troubling picture of the role played by SIL in Latin American in the 50s and 60s. It accuses SIL of working as the foot-soldiers of US oil corporations, and various military governments. But then again anthropologists don’t have a particularly glorious history either…