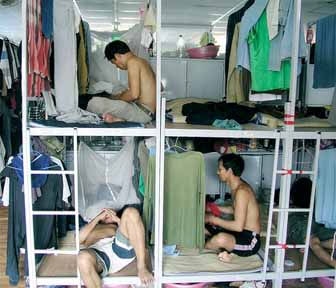 Seems that violent worker protests aren’t unique to China, and “Made in Taiwan” does not ensure that something is made under humane working conditions.

A riot by Thai workers on Sunday night in Kaohsiung wasn’t a prison riot, but there were many common features. Although the workers are not prisoners, their freedom is restricted to almost the same degree and the conditions they live in are not dissimilar to a jail. In a nation that prides itself as being built on human rights, the riot that swept through the community of construction workers is a shameful incident.

Via Michael Turton, who also links to the following useful blog posts by David on Formosa, ESWN, and Anarchy in Taiwan.