Although the film will be shot in Gujarat, Shashwati does all the interviews in Hindi, and in the future we are likely to be visiting North India on a semi-annual basis, so I figured I ought to start studying Hindi. I made an initial stab at it during our last trip, but didn’t get very far. This time I hired a private tutor and really buckled down. Because I’m only going to class once a week, I don’t expect to get beyond the basics, but I’m already pleased as punch that I can decipher the Devanagari script, and I’m even learning how to bargain with rickshaw drivers. I still read like a little child, spelling things out letter-by-letter, and not always getting things right, but it is great fun. 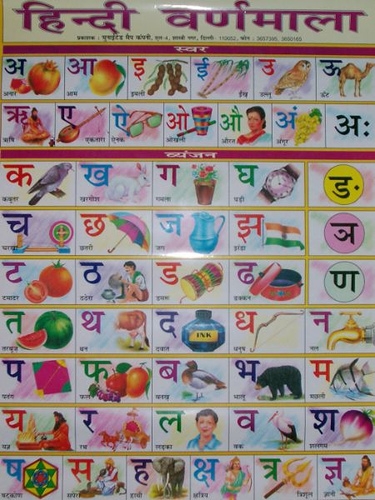 I’m using Rupert Snell’s Teach Yourself Hindi, which comes with CDs I’ve ripped to my iPod and listen to on the train. But for learning the script I found his smaller and more focused volume, Teach Yourself Beginner’s Hindi Script to be invaluable. I love that he has many examples of actual roadside signs that you can practice on.

One of the cool things about the Devanagari script is that it is ordered phonologically. The sounds are listed in order of where in the mouth the sound is produced: gutturals (produced in the throat) first, and labials (produced by the lips) last, with a steady progression in between. (See here.) I am curious when this ordering became standard. I know that the study of language and grammar has ancient roots in India, such as the famous fifth century scholar, Pāṇini, but the Devanagari script is actually much more recent, dating from the twelfth century. Some of its antecedents were the Siddham script, the Gupta script from the fourth to the eighth centuries and, ultimately, the 5th century BCE Brahmi. (I really like the way Brahmi looks!) Looking at these scripts I see that many of them listed in the same order as the Devanagari script, but it isn’t clear if this is a modern convention or if there are historical reasons for listing them this way.

Perhaps some of my erudite readers have more insight into this?

PS: It is very annoying that Firefox for the mac doesn’t properly display Devanagari. This seems to be a known bug, but nothing has been done about it…

UPDATE: In the comments over at Amardeep’s blog, Srikanth pointed out this article:

Recalling sage Panini’s 2,000-year-old contribution to acoustics, the former Vice-Chancellor of Hyderabad University, B.S. Ramakrishna, on Thursday said the sage’s well-researched arrangement of the alphabet of Devanagiri script was a unique effort.

Now, as I pointed out above, Pāṇini died a few centuries before Devanagiri came into being, but I suspect that this is still accurate — that the ordering is based on his research. However, he probably applied it to a different script. Perhaps Gupta?