There is an old saying in Taiwan:

“The number one job is selling ice desserts and the number two is being a doctor.”

I personally wonder just how old this saying really is, but that’s how the Taipei Times introduces the phrase 「第一賣冰、第二做醫生」in a story about an entrepreneur who has struck it rich selling seafood flavored ice cream! (Chinese version here.)

I initially suspected it might be traditional “shaved ice,” rather than ice cream, but it does look like real ice cream in the picture I found on Shia Bing Hsieh Chiang’s (蝦冰蟹醬, “shrimp ice crab sauce”) official web site: 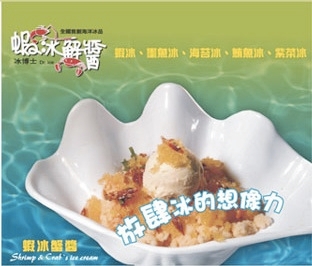 The 13 flavors on offer include pineapple shrimp, wasabi cuttlefish, strawberry tuna and mango seaweed, all in stark colors from orange to green to black.

All are served in white or blue shell on fish-shaped plates and bowls, and some also come with a sprinkle of small dried fish, roe or chopped squid.

Anyone want to give me a research grant to investigate further?