The people of the Balkans may not be able to agree about much, but they can agree about one thing: they all love Bruce Lee! 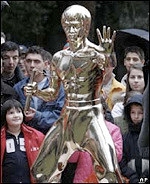 I was going to blog about this back in September, when I heard about it on NPR (story here), but now they’ve actually unveiled the statue. The NPR story explains that Bruce Lee is in a defensive (rather than attacking) posture, but that even this caused problems. They had to point the statue north so as to avoid making it seem like he was defending them against any of their former Yugoslavian neighbors.