The streets are a mess in Paris, as the Delanoë administration carries out its Mobilien project of constructing reserved lanes for several of the city’s bus routes: 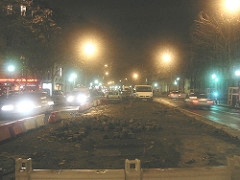 Taxis can also use these lanes. As can bicycles; interestingly, as one would think that cyclists would feel uncomfortable with enormous buses looming behind them, but the administration claims that most of them are happy.

At the same time, a tramway is replacing the buses that run along the southern edge of the city (and adding more construction headaches in the process).

While many are thrilled with the promised improvements in public transport, many are exasperated by the current chaos. Many too criticize the design choices that have been made. Merchants complain of the parking places that are disappearing. Motorists are afraid of being hemmed in by the dividers that separate the lanes. And some see this as just the beginning of a radical anti-automobile campaign pushed by the Green coalition partners of Delanoë’s Socialist-led administration. Jean Tiberi, former Gaullist mayor of Paris, now reduced to mayor of Paris’s Fifth Arrondissement, leads the charge. His monthly arrondissement newsletter has recently been a litany of complaints, including the allegation that poor bus lane design was at fault in the death of one pedestrian.

Delanoë is striking back with a major communications campaign. The city has distributed questionnaires to every household in the city, soliciting people’s opinions on the current changes and future directions, while an accompanying brochure makes the case for its program. This effort is advertised on posters across town. Unlike the Fifth Arrondissement newsletter, the city provides space in its brochure for the opposition to weigh in.

The brochure solicits the public’s input on transport planning for the coming ten years, highlighting the question “et si on se déplaçait autrement?” (“and if we were to move about differently?”). What I find disappointing is that it completely ignores one of the most potentially revolutionary means of transport, the self-balancing electric scooter introduced to the world by Segway.

The Segway might be one way to tempt Paris’s professionals out of their cars. Paris is home to a large professional class that is much wealthier than the working class that lives in the banlieues (suburbs). However, many of these professionals go to work in the banlieues because the corporations that they work for prefer the lower costs of maintaining offices there. And many of these professionals drive their cars. The working class people who work in support services in the city commute in by train. Could more professionals be induced to take the train in the opposite direction? Perhaps, if they knew a Segway was waiting to take them from the station to their office.

I’ve taken public transport to a number of corporate offices in the banlieues. What I’ve typically found is that a quick and efficient train ride is followed by a lengthy walk or a ride on an infrequent bus. The lower urban density is such that it would be very difficult to provide an attractive bus service in these areas. But Segways are well-suited for carrying people over distances comparable to the typical bus ride, and they do so without much fuss, and they take people right to their destination.

Segways could similarly help relieve the isolation of the working class people who live in les cités (public housing projects), easing their trips to the train lines. At $4000 for the base model, Segways are hardly accessible to the working class today. But prices should drop with time. And one could envisage the creation of short-term rental stations, much like the self-service bicycle rental stations set up by cities such as Rennes, that would allow one to pick up a Segway at one station and drop it off at another. Indeed, the placement of Segways at the stations where they are most needed at various times during the day should be facilitated by the Segway’s self-balancing autonomy, which would make it easy for a single person to move a dozen of them at a time.