I often hear people in France expressing fascination with guns in the United States. Michael Moore’s film Bowling for Columbine was a big hit here, and Moore was on magazine covers across the country: 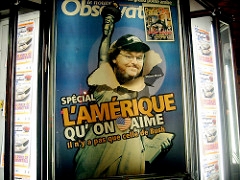 With all this talk, a person can get nervous heading back to the States. Especially when, traveling on French government business, I received a sheet of advice from the Foreign Ministry stating, in bold face letters:

In many states, the bearing of arms is authorized and common. Visitors must, therefore, in all circumstances, maintain their calm and their sang-froid.

However, when I arrived in Minneapolis, I found that all this worry was really blown out of proportion…

I was relieved to find, for instance, that there is no right to bear arms in The Gap: 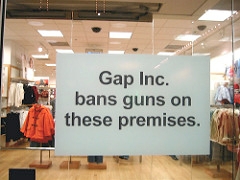 Similarly for the Banana Republic, and the YMCA: 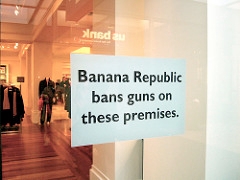 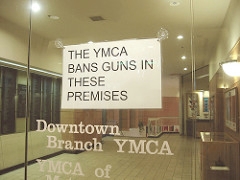 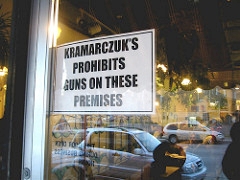 I was at the deli for the North East Accordion Festival 2003, and I can testify that the right to bear accordions, a right much respected in France, was not infringed, whereas there was not a gun in sight.

Guns are not even allowed in the Walker Art Center: 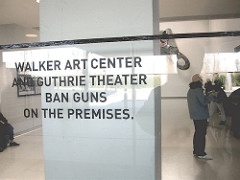 However, it is not clear that this protection extends to the Walker Center’s outdoor sculpture garden: 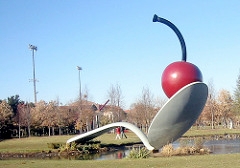 While viewing Oldenburg and van Bruggen’s Spoonbridge and Cherry, therefore, I made sure to maintain my sang-froid.