There are 773 of these columns in Paris: 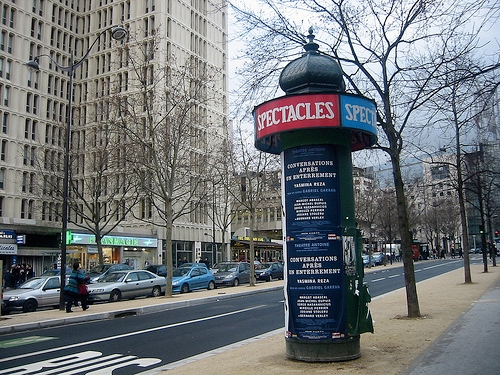 Soon their number will drop to 550…

The columns are named after Gabriel Morris, a printer, who organized their installation in 1868 for advertising purposes. 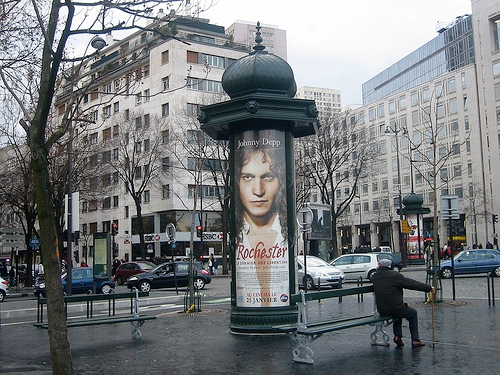 Both are used to store street cleaning equipment, hidden behind a discreet door.

The City Council voted this summer to remove 24 of the 274 theater columns and 199 of the 499 film columns, replacing some of the columns with ones of a new design. But, according to Nathaniel Herzberg, reporting in Le Monde, theater producers have only become aware of this in the past few days, and they are protesting.

The City Council justifies its decision by saying that it will reduce clutter.

Ironically, this sort of column was originally justified by the argument that they would reduce clutter. The Morris columns are based on the Litfaßsäulen in Berlin, and copied throughout Germany and Austria. Here’s a Litfaßsäule from Vienna: 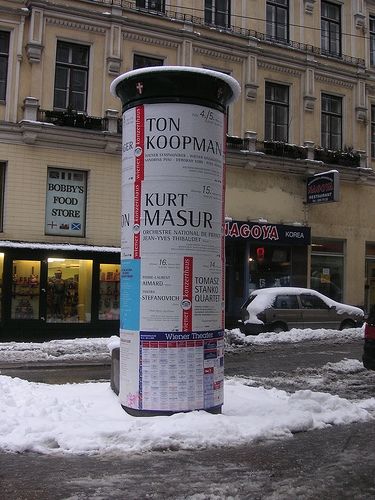 Ernst Litfaß was a printer in Berlin, who in 1854 obtained permission to install such columns on the basis that they would provide a standard place for posting advertisements. They also serve as places to store street cleaning equipment.

The Litfaßsäulen in Berlin and Vienna have a nice feature that the colonnes Morris in Paris lack. In addition to individual advertisements, the Litfaßsäulen carry collective cinema, theater, or concert listings. Need to know if there’s a film showing nearby? No need to pick up a newspaper, consult one’s Palm Pilot, or call Movie Phone; it’s all there.