About a year ago I blogged about coming across an online exhibit including photos of an old friend of mine, Thorne Anderson, who I hadn’t seen in a while.

Unlike a lot of other reporters, they aren’t embedded — but take risks to show us the human side of war — and of Iraq.

That exhibit is now offline, but the good news is that there is a new book featuring work by four of the photographers: 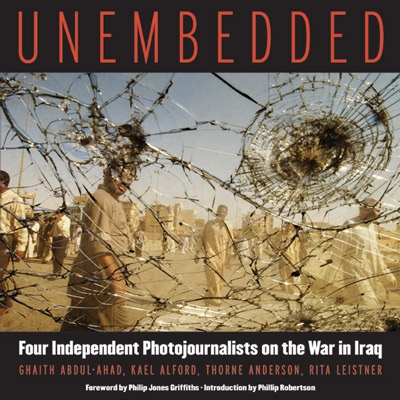 The deepest newspaper truths are not always found, by the way, in the news section of your daily rag. Last Tuesday, for instance, the detail that caught my attention in the New York Times appeared in the crossword puzzle. To the clue, “war correspondent in modern lingo,” the 5-letter answer… I pause for a moment to give you a chance to guess… was “embed.” Doesn’t that tell you just where the Bush era has left us in media terms? So much more reason then, to cherish a photo book aptly titled Unembedded and just out from Chelsea Green, an adventurous small press in Vermont. It offers the striking (and deeply saddening) photos of four independent photojournalists — two Americans, a Canadian, and the Iraqi Ghaith Abdul-Ahad (who also does remarkable pieces for the British Guardian from time to time). The four of them managed to make their way, on their own, into embattled, partially destroyed Najaf in August 2004, among other places. In this book, Iraqi casualties and sorrows are front and center. It’s certainly not upbeat, but it is a powerful reminder of the world the Bush administration has created in Iraq and a project to support

I had a chance to have breakfast with Thorne this morning, as he is in New York for the launch of a national touring exhibition at the Redux Gallery (where it will be till the end of February). And this Monday (January 23rd) at 7:00 pm, he will be at Barnes and Nobel in Union Square for a presentation and book signing. More information here.

Photographs, updates, and more can be found on the publisher’s website, as well as on a site devoted to the book. From either location you can click through to see a short movie with images from the book and narration from the photographers.