Although I am somehow now functioning in a Chinese language working environment, I know myself to be a very slow language learner. While many people study languages because they have a natural facility for doing so, I study languages for the opposite reason: because it is so damn hard.

Although I normally wouldn’t touch BBC science reporting with a ten foot pole, I’m happy to link to this story which gives me a neat biological explanation for my own struggles.

People with a gift for other languages could have different brains from those of other people, a study suggests.

Neuroscientists at University College London say they have more “white brain matter” in a part of the brain which processes sound.

You see, I’m just lacking “white matter” in my brain. Interestingly, for the experiment they picked as an example a sound that I’ve been struggling with in my own attempts to learn Hindi:

Those involved in the trial — all native French speakers — were asked to distinguish between two similar sounds from different languages.

The first was the “d” sound found in their own language which is made by placing the tip of the tongue against the top teeth.

The second was a “d” found in Hindi, which is pronounced by curling the tongue upwards towards the roof of the mouth.

… Some of the fastest learners were able to tell these apart within a few minutes, while the slowest learners were only able to make random guesses at the less difficult stage after 20 minutes of training.

Based on my own experience with this test I can make an educated guess at which of the two pictures below represents my brain! 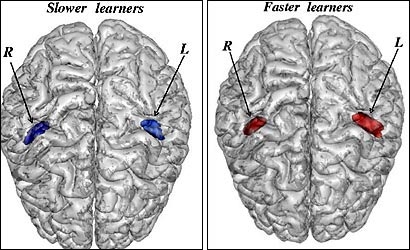 UPDATE: Thanks to the ever-vigilant Tim May, a link to a Language Log post that discusses the research in more detail.