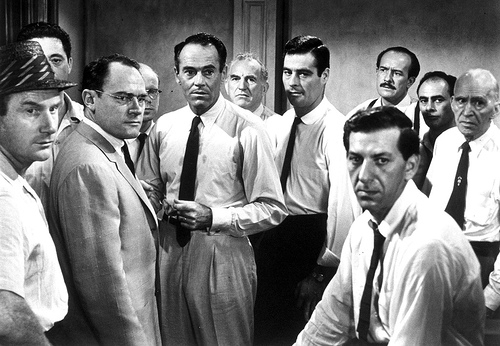 Having never served on a jury, my knowledge mostly comes from the movie, “12 Angry Men“. But I’ve always found the instructions given to juries fairly odd. They seem to imply a very strange idealized notions of language, thought, and discourse that have no bearing on reality. It is as if they were written by Habermas.

Take, for instance, this recent Washington Post article about a juror in the Moussaoui trial. A juror got in trouble for looking up a word in the dictionary. The Moussaoui jury is charged with weighing “aggravating factors” against “mitigating factors” in determining whether or not he should be sentenced to death. So one jury member looked up the word “aggravating” in a dictionary.

As it turned out, the juror’s extracurricular research Thursday night had been forbidden by the judge. When jurors on Tuesday asked whether they could have a dictionary, she told them they were not allowed to do any independent investigating at home.

…As [U.S. District Judge Leonie M.] Brinkema explained again yesterday to the 12-member panel, deliberations could be skewed if one juror knows more than the rest. “What that would do is change your role as jurors,” she said. “You would then become advocates for one side or the other.”

The definition of “independent investigation” is rather vague. Is looking up a word in a dictionary really research? Such confusions are not an uncommon event. In fact, there was even a recent post about just this problem by Roger Shuy over at Language Log. He points out that linguists have been writing about this issue for several decades:

Robert and Veda Charrow started it off back in the 1970s with research that showed that jurors were generally confused and even misinformed by jury instructions (Columbia Law Review, 79:7: 1306-1374). Many others since have followed up on this topic, including Peter Tiersma’s recent work with the California Judicial Counsel’s Task Force on Jury Instructions. Judges worry about giving jury instructions that might get the case overturned on appeal but one must wonder why it is that jurors can’t be told what confusing instructions really mean. At least part of the problem stems from law’s apparent need to use legal language to non-lawyers even when they don’t understand it. The concepts of register change and participant perspective don’t seem to occur to them. Tiersma’s book, Legal Language (Chicago, 1999) details this issue at length. It’s a very important book.

However, even assuming that jurors can understand the instructions given to them (with or without a dictionary), I’ve always found the attempt to control what information juries pay attention to quite odd. Even if certain facts of the case at hand might be hidden from a jury, people’s general knowledge of the circumstances surrounding any particular case are likely to vary considerably — as is their vocabulary and general level of knowledge.

One issue at hand is the extent to which educated people are excluded from juries. Some scholars worry that this is a problem, although one recent study suggests that if it is a problem it may have to do with other factors besides the jury selection process — which doesn’t seem to exclude the educated. (They may be less likely to serve for other reasons however.)

Having never served on a jury myself I think I would find such requirements quite stifling. After all, I’m the kind of person who rushes to Wikipedia several times a day. If I had to deliberate on someone’s life without access to such resources I would be pretty angry.