When I think of life in New York City, I think of the train I used to take every day. The train we heard in the distance from our bedroom window … the 7 train. You can see people reading newspapers in almost every language in the world on the 7 train.

The 7 train, which runs above ground in Queens, also provides a window onto the city. The New York Times today ran a great slide show about the views one sees from the 7 train. The photos were taken by Jeff Chien-Hsing Liao. Below is a detail from one of the photos (which is actually from under the train tracks): 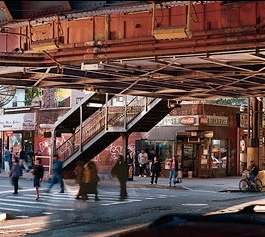 Here in Taiwan we also hear a train from our bedroom window — the railway that runs from Hualian to Taitung. It’s a comforting sound … like home.

You can find more 7 train related photos on Flickr.