Kieran Healy recently posted this chart showing incarceration rates in the US compared to other “basically well-functioning advanced capitalist democracies”: 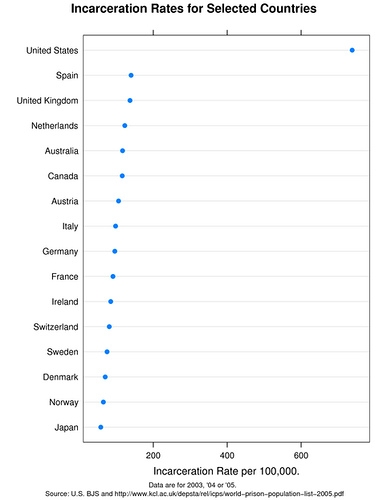 Earlier he posted a more inclusive chart which also listed a few “countries that are not exactly model states.” America is still way out in the inglorious lead.

But what neither of these charts makes clear is who is getting incarcerated in America. These two charts from a 2003 Human Rights Watch report show what I mean:

State and Federal Inmates by Race

As they say in their report:

Even more troubling than the absolute number of persons in jail or prison is the extent to which those men and women are African-American. Although blacks account for only 12 percent of the U.S. population, 44 percent of all prisoners in the United States are black.

So why are so many people in jail? It isn’t because of violent crime, which has fallen faster than people are being locked up. One answer is the draconian “War on Drugs” which disproportionately targets poor and minority drug users and mandates excessive jail times.

Perhaps the single greatest force behind the growth of the prison population has been the national “war on drugs.” The number of incarcerated drug offenders has increased twelvefold since 1980. In 2000, 22 percent of those in federal and state prisons were convicted on drug charges.

But another reason can be found in social theory, according to which African Americans constitute a permanent racial under-caste. As Loïc Wacquant puts it (more here):

To understand these phenomena, we first need to break out of the narrow “crime and punishment” paradigm and examine the broader role of the penal system as an instrument for managing dispossessed and dishonored groups. And second, we need to take a longer historical view on the shifting forms of ethno-racial domination in the United States. This double move suggests that the astounding upsurge in black incarceration in the past three decades results from the obsolescence of the ghetto as a device for caste control and the correlative need for a substitute apparatus for keeping (unskilled) African Americans in a subordinate and confined position—physically, socially, and symbolically.

Any explanation of America’s unusually high incarceration rates can not be separated from the racial composition of its prisons.