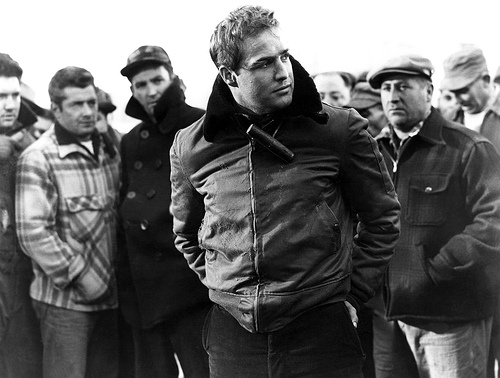 That organized crime controls New York and New Jersey’s waterfront is not news. Elia Kazan’s classic 1954 film On the Waterfront (filmed around Hoboken, where I grew up) depicts the (true) story of one man who took on the mob, but as William Finnegan’s excellent New Yorker story “Watching the Waterfront” (print only) shows, little has changed since then. Finnegan’s story focuses on the new attention being paid to organized crime’s grip on New York Harbor in light of recent security concerns. Of course, the fact that the longshoreman’s union is one of the strongest unions in the country might be motivating the department of Homeland Security (which has been involved in union busting since its creation), so I am somewhat dubious of their sudden interest in securing US ports. Still, Finnegan’s story is well written and full of details that feel as if they were taken from an episode of The Sopranos.

For instance, this scene where he goes into a Brooklyn deli with J. Kevin McGowan, the assistant police chief of the Waterfront Commission of New York Harbor:

McGowan, who is red-faced and white-haired, was wearing a sharp gray suit that day. We went to lunch at an Italian deli near his office, on the Brooklyn waterfront. He said, “This is a Gambino place, so we should maybe get our food to go. The former owner, we got him on conspiracy to distribute cocaine. He’s doing twenty.” As we approached the deli, an extremely large man in a brown velour tracksuit came out and passed us without looking our way. “That’s the new owner,” McGowan said. Inside, McGowan told the counterman, “I’m doing the chicken parm.” The counterman asked me, “What did he say? Did he say he was retiring?” McGowan patiently repeated his order, and the counterman said to me, “He thinks he’s saving the world.” Nobody smiled.

The legacy of Kazan’s film is so strong that a major police operation was code-named “Operation Brando”! Later, visiting one of the dockyards, Finnegan meets Tom Hanley, a crane operator and union leader who McGowan says “Must be one of the good guys.” McGowan grew up in Hoboken back before it was gentrified, when it was more like “On the Waterfront.” In fact, Hanley was in the movie!

As a kid, Hanley had a role in “On the Waterfront.” He played Tommy, the boy who looks after Terry Malloy’s beloved pigeons in their rooftop coop in Hoboken, and then, devastated by the news that Malloy has begun coöperating with a crime commission, kills the birds.

“They were building pigeon coops on the roof of my tenement, so the movie company hired me, kind of like you hire a kid to watch your car when you’re in Harlem. I guess they thought I was going to burn the coops down or something,” he said. “Anyway, I was feeding the pigeons, and I got sent to the Actors Studio, on West Fifty-seventh Street, where Ella Kazan and Budd Schulberg were doing auditions.” Kazan was the film’s director, and Schulberg was the screenwriter. “They deliberately enraged me,” Hanley said. “They said, ‘We heard your father was a squealer.’ So I went nuts, started throwing chairs at them, and that’s what they wanted, because there’s that scene where I throw a pigeon at Brando. At the time, I didn’t really know who Brando was. But the girls in my neighborhood knew who he was.”

The movie company offered Hanley two hundred and fifty dollars a week. “That was like half a million dollars to us,” he said. “My mom and I were starving. We were eight months behind on our rent, which was fourteen dollars a month. It lasted only two weeks, but still.” The work itself was easy. “Ella Kazan walked me through it. He just kept saying, ‘You can do it.’ I’d never had attention like that before.” He paused. “I was on TV once after that, on ‘The Red Buttons Show,’” he said. Then, with impeccable timing, he added, “I pursued my acting career on the waterfront, where I pretended to be a tough guy.”

But the best anecdote in the story goes to another union leader at Hanley’s dock, Tony Perlstein, “a longshoreman at Global, who has worked as a labor organizer in other industries, and is a graduate of Brown University”:

Perlstein says that he has been threatened, both subtly and otherwise. After one union-local meeting in New Jersey, he was confronted by a group of workers aligned with the Old Guard. “Hey, Tone, you think we’re stupid?” one of them asked. He put a finger in Perlstein’s face and bellowed, “I Googled you!”

The New Yorker isn’t online unless you have access through your university, but the website does have this interview with William Finnegan about writing this story.