One thing I’ve learned about the British: they love to tell you alternative routes. If you ask how to get from point A to point B, don’t expect to just be told the shortest, quickest, route as a New Yorker might tell you. No, the British will tell you a half a dozen possibilities. My father-in-law isn’t British, but he’s Cambridge educated. We once had a nearly half-hour conversation about the various routes one could take to get from China to India. After our recent trip I understand where this penchant for alternatives comes from.

But why? Unfortunately, we learned that the hard way. As one London acquaintance explained to us: “You need alternatives because the transportation system is so unreliable.” Indeed. I’d say about a third of our subway and train journeys were delayed, canceled, or rerouted. It normally takes about an hour to get from London to Heathrow, but it took me almost three hours they day I left!

The London bus system, however, is fantastic, and riding on the upper deck is a great way to learn your way around the city! 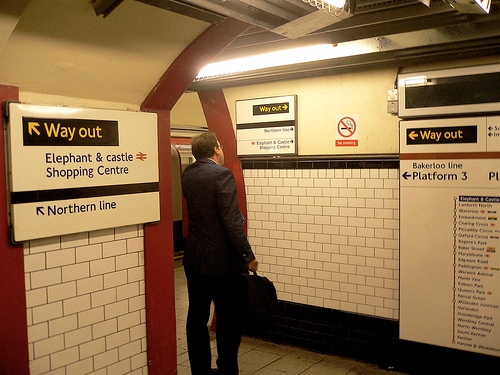 PS: Can you believe my luck? Just as I was snapping this picture of some confusing exit signs, a harried commuter ran into the frame and looked confused for me without any prompting!