Not having lived there for a long time, I don’t much write about Hoboken on this blog, but that is where I grew up. The setting for On The Waterfront, Hoboken was once a large shipping port. As a result, it has long been famous for its drinking establishments.

Below the fold is one of the most remarkable documents I’ve come across doing research for our film. I found it using Google’s new “news archive” search which goes back 200 years and covers a number of papers from around the world. The article, entitled “Call Out the War Dogs! Gandhi Insults Hoboken” was written in response to a letter Gandhi wrote back to a speakeasy owner who, in 1931, desired to escape from it all by joining Gandhi’s ashram in Ahmedabad.

Who could have guessed that, 75 years later, a boy from Hoboken would go and make a film about speakeasies in Ahemedabad? 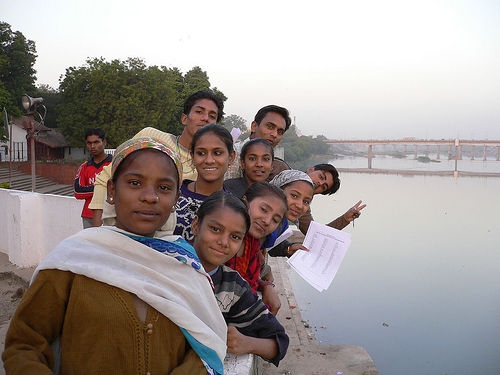 [A picture of Chhara kids visiting the Ghandi Ashram in Ahmedabad.]

Note: There are some interesting turns of phrase in the article, which I have tried to link to appropriate sources. Any suggestions for additional links are welcome. I’m particularly curious about the name: Euthymics Chagaris …

UPDATE: Shashwati reminds me that I’m a certified bartender, having graduated from the International Bartending School in 1988 after a two-week course. I’d completely forgotten about the only diploma I’m willing to hang on my wall…

Mahatma Gandhi, leader of India’s Nationalist millions whose abbreviated loin cloth proves that he has already destroyed his share of the cotton surplus, refuses to go to London to attend the round table conference. In view of circumstances he prefers to remain at his model colony in Ahmedabad Guzerat Province. Further, the Mahatma discourages Americans from visiting Ahmedabad.

To a man in Hoboken — one Euthymics Chagaris, a prominent clubman — who had written, seeking to join the model colony, the Mahatma replied:

“You should know the climate of India is not suitable to those brought up in the vigorous clime of the West and that life here is very hard and perhaps much simpler than you imagine.”

It goes to prove that the Mahatma has never been in Hoboken.

The Man from Hoboken was seeking surcease from sorrow. He was tired of it all. So he sought the solace of a model colony in Ahmedabad. After Hoboken, he figured anything would do. The old cobblestone streets, down around the dock, worried Euthymics.

He had heard that at Ahmedabad there is a famous mosque, Jain Temple and well. The Jerseyite, putting two and two together, undoubtedly thought the mosque a breeding place for mosquitoes. Naturally, this would put him right at home in Ahmedabad. A Jerseyite rambling away from home and finding no mosquitoes is like a hot dog stand without mustard.

Furthermore, there is a celebrated institution of learning in Ahmedabad — and this, too, would immediately help to acclimate the man from Hoboken, accustomed as he must be to rooting for Princeton. Ahemedabad is the seat of Rat Guza College. Thus inspired, the Man from Hoboken probably imagined himself out on the side-lines giving three rah rahs and a tiger for dear old Rat Gura.

Of course, if the mahatma doesn’t want any American visitors, that would seem to be the end of that. Yet, viewed as a strictly diplomatic imbroglio, this is a case for the State Department.

Here is a man from Hoboken who wants to got to Ahmedabad and they will not vise his passport. Instead, the Indian statesmen pens a note in which he not only discourages American travel — keeping our flag off the high seas — but also slanders one of the greatest seaports in America — Hoboken.

In effect, the Mahatma says that Hoboken and its people are no way fitted for the rigors of Ahmedabad.

The Chamber of Commerce in Hoboken has been sadly remiss in its duty, so far as this case is concerned. To date, not a single word has come from that quarter. At least the Mahatma should be sent a prospectus of Hoboken, showing the population, the number of men out of employment, the average rainfall, the strength of the police and fire departments, and all those alluring bits of romance and adventure marshaled by statisticians employed by chambers of commerce. It might be that the Mahatma could be inspired to start a model colony in Hoboken.

It remains for the Federal Government — or, at least, the Governor of New Jersey — to take a hand. An attack of this kind calls for retortion — a nonamicable procedure short of war which would have the crushing effect of forever barring the Mahatma from Hoboken.

England may be afraid of the mighty Mahatma. So, too, the good Lord Wellington, Viceroy of India, who hears every day the shouts of the multitude, “Long live revolution!” (Inquilab zindabad!), and “Long live Mahatma Gandhi!” (Mahatma Gandhi ki jai!), and “Long live Gandhi, our King!” (Gandhi, zinzebad mahraj!) — which is giving England the maharajberry in India: but neither America nor Hoboken has anything to fear!

A stiff note, then, Dr. Stimson, to Mahatma Gandhi.

It might be argued, by those opposed to stern measures, that in theosophy, or esoteric Buddhism, Mahatma means “Great-hearted one,” and that it was out fo the goodness of his hear that Mahatma Gandhi advised the Hoboken man to stay home and sing with his fellow-townsmen, the idyllic song of the docs.

“How dear to my heart is that Hoboken bucket,

That Hoboken bucket that serves us so well.”

The Mahatma probably knows that Hoboken is a wet town — being so near the docks — and that its inhabitants are given to the quaint old American custom of “rushing the bucket,” a pasttime once known as “rushing the duck.” This is what brought about the current slogan in New York, “Seidel over to Hoboken.”

It also put up the bars against Euthymics Chagaris entering Ahmedabad; for the Mahatma, knowing that Euthymics is a prominent clubman in Hoboken, feared the worst: that Euthymics might open an Indian Club in the Guzarat Province — in other words, a speakeasy. Hence the rebuff.

Euthymics demands that diplomatic representation be made and he is right. It is a round table question. Peace must be maintained between the United States and His Majesty’s dominions overseas. What is sauce for Euthymics is sauce for Gandhi.