Why, after just a few days of use, would I switch from using a rock-solid piece of software I paid for and have used for years to a public beta which is full of bugs? My “to do” list is one of my most important lists — if it doesn’t work I don’t use it, and if I don’t use it I forget what I am supposed to do, so this is one of the most important tools I use in my daily life. I’m sure “to do” nirvana will come with the release of OmniFocus, but after having tried many other tools I have long been using Tasks by Alex King. Alex is a first rate web developer and Tasks reflects the care and professionalism that characterizes all his work. He recently added a bunch of features (such as tags) which made Tasks even better. Stikkit, on the other hand, smacks of Web 2.0 hype: it looks great, but is far from ready for prime time. Some key features still don’t work as advertised, and there are numerous bugs. So why would I switch to Stikkit from Tasks? Hopefully these two pictures will explain why: 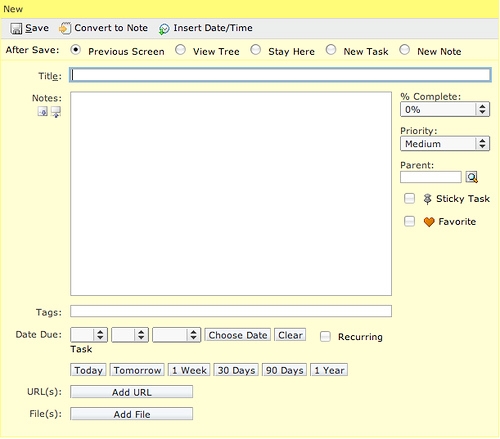 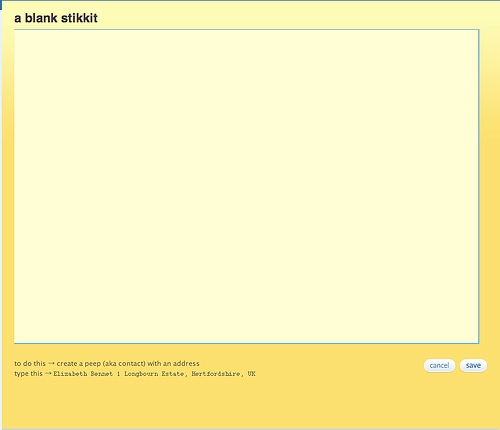 These pictures show the window you see when you create a new item in Tasks (above) and Stikkit (below). While there aren’t a lot of fields to fill out in Tasks, there is only one for Stikkit. That is because Stikkit automatically parses your text. If you write “due: tomorrow” it will add a due date. If you write “@work” it will tag the item with the “work” tag. If you write “todo” the item is listed as a todo, and if you add an URL it is automatically linked. I’ve seen attempts at this kind of natural language processing before, but never implemented so well. And yes, you can even turn it off if you need to.

But it is more than that — Stikkit’s simple syntax lets you create both outlines and lists of todo items within a single note. This is very important for me. Tasks is hierarchical, allowing you to create subtasks, but you then have to fill out a new item form for each subtask. This can be a real pain. If I’m writing up a note to remind myself to go shopping I don’t want to make a separate entry for each item on my shopping list — but Stikkit lets me easily create a checklist within my note!

I also have high hopes for the currently non-functional sharing features of Stikkit. I delegate a lot of my tasks to various graduate students and I have a hard time keeping track of who is supposed to do what and when they have done it. Tasks Pro offers features for delegating tasks, but it is targeted at corporate clients which means that there are different prices for different numbers of users. Stikkit lets you share any task with anyone for free (or at least it will once those features are working properly).

Both programs let you export your data to iCal. I like the fact that Tasks lets you list todo items as events rather than todos, and I wish Stikkit had that feature. There are lots of other little things about Tasks which shine. It is certainly a more polished product. But when it comes down to it, I hate forms and the need to fill out a form for each new tasks limits the usefulness of tasks. The integration of Stikkit with Quicksilver was the real kicker. I can’t imagine an easier way to jot something down.

UPDATE: More from Merlin Mann, who offers a great tutorial.