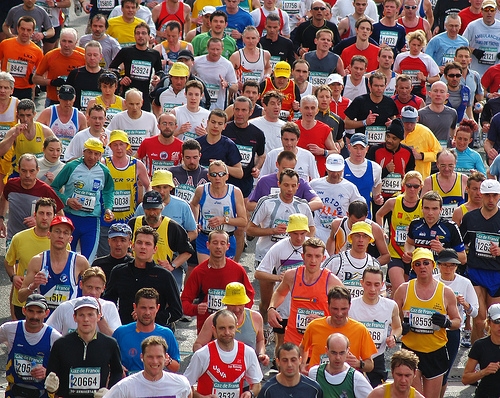 In his book The Wisdom of Crowds James Surowiecki relates an anecdote about “Francis Galton’s surprise that the crowd at a county fair accurately guessed the butchered … weight of an ox when their individual guesses were averaged.” While individual guesses varied widely, the median of the crowd’s guesses was spot-on. The implication being that crowds are wiser than individuals.

Today, however, NY Times science columnist John Tierney blogs about “information cascades,” where “large groups of people can reach a ‘consensus’ without most of them really understanding the issue: Once a critical mass of people starts a trend, the rest make the rational decision to go along because they figure the trend-setters can’t all be wrong. The danger is that you end up with the blind leading the blind.”

So, should we trust crowds or not? Well, before you answer that, it is important to understand that there is a big difference between the two situations described above. In the first we are dealing with factual information and averaging the sum of a large pool of guesses. In the second one we are dealing with a series of binary choices, with the crowd following the lead of the person to make the first choice. So it may be that crowds are better at some tasks than others. Unfortunately, modern democracy seems to more closely resemble an information cascade than a county fair …