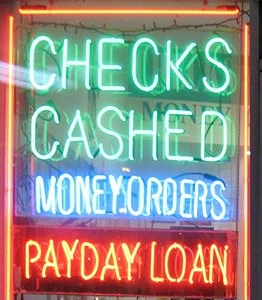 If thou lend money to any of My people, even to the poor with thee, thou shalt not be to him as a creditor; neither shall ye lay upon him interest. (Exodus, 22:25)

The key texts of Judaism, Christianity, and Islam are all very clear about the sins of lending money for interest — and yet it doesn’t seem to have stopped anyone who professes those faiths from making a good profit. When was living in North Philadelphia while attending Temple, the only businesses around us were funeral parlors, pharmacies, and check cashing places. Check cashing places offer “payday loans” which can have annualized interest rates as high as 390 to 900 percent! Things are even worse in the developing world, where suicide is one of the leading causes of death among rural women. Especially in China, but not because women try more often — just because they succeed more often due to inadequate emergency health care. It is a major problem in India as well.

Among the Chhara, the Denotified community at the heart of our film, as many as fifteen percent of the population still thieve for a living. Although there community increasingly boasts of lawyers, teachers, journalists, artists, and other professionals, many members of the community are unable to escape a life of crime. Part of the problem is simply discrimination. We know of one woman who has an MA in English literature, but can’t get a job as a teacher because nobody will hire a Chhara. But part of the problem is the curse of usury, as eloquently described in this article by Chhara journalist Roxy Gagdekar:

those trapped in Chharanagar’s criminal gangs, including Rohan, are caught in the double bind of debt of disrepute. A gang generally borrows money on heavy interest (5% to 10% per month) from moneylenders in and around the locality, and its burden increases after each failed criminal run. Chhara gangs, usually made up of five to 12 members, choose targets in cities other than Ahmedabad. Therefore every sortie drains the gang’s resources: money is spent for food, commuting, and accommodation.

… “The only solution is to try to steal enough to clear the whole financial burden of the crew,” said Nirmal, another Chharanagar resident bound by Bhach. “We don’t have property to mortgage or the goodwill secure loans from banks.”
Rohan, now in his 40s, joined a gang some 15 years ago. He has not been able to break through the forbidding circle of liability and thieves’ code of honour.

“I was shut into a gang when I was a student of second year, because we were starving,” he said.

One solution would be to implement a micro-credit program in Chharanagar, but the hurdles are tremendous. Not only are the local moneylenders very powerful and eager to defend their grip on the community, but the ongoing illegal activities scare away most NGOs. Still, the one thing micro-credit programs have been shown to do well is to reduce the power of moneylenders.

Last year, when Muhammad Yunus won the Nobel Peace Prize for Grameen Bank’s innovative microfinance program in Bangladesh the media was largely uncritical, with few people asking any tough questions. But some did point out that micro-credit did little to lift people out of poverty. As Gina Neff points out, most recipients of such programs are already relatively well off (for poor people), and as both Neff and P. Sainath point out, micro-credit still hasn’t been shown to do much to lift people out of poverty.

When I was in India earlier this year I went to a talk by someone who has worked for decades doing rural development in West Bengal who is now involved in a mico-credit program. He was very open about these criticisms, even as he defended the programs. He said that the only statistics most micro-credit programs keep track of are repayment rates, and repayment rates don’t tell us anything about whether people are being lifted out of poverty. He also argued that there was no magic link between micro-credit and the empowerment of rural women. In some cases it did have that effect, but in many places it did not — sometimes even having a negative effect. Like the above critics, he argued that micro credit needed to be part of a larger solution.

In the end, even though the 24 to 35 percent interest rates offered by mico-credit programs are far higher than the rates most rich people would get at a bank, they are much, much lower than what local moneylenders usually charge and for this reason alone I think they can be quite liberating. I hope the Chhara can find a way to implement a functioning microcredit program in their community, preferably one targeted at the women who are all too often forced to brew illegal alcohol when they are widowed at a young age and with no marketable skills. We met some tough Chhara women who are working to create alternative local industries, but its an uphill battle …